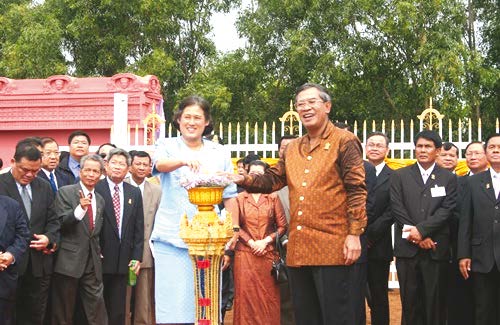 “I am pleased that Kampong Chheuteal High School has been operating for quite a while and the committee members from both countries have performed their tasks very well. It is my wish to play a part in educating Cambodian children. They have high potential and, given access to good education and training, will benefit from such opportunity themselves and become assets to Cambodia and to the world in the future.”

An address delivered by HRH Princess Maha Chakri Sirindhorn
to the Thai-Cambodian Joint Commission appointed as the Joint Ad Hoc Working Group
In charge of Her Royal Highness’s project to provide assistance in education
to the Kingdom of Cambodia. At the Meeting Room of
the Royal Aide-de-Camp Department, Chitralada palace.
On August 22, 2005

The close tie between Thailand and Cambodia and Her Royal Highness’s keen interest in the Khmer civilization led to several visits of HRH Princess Maha Chakri Sirindhorn to the Kingdom of Cambodia, each of which was warmly welcomed by the Cambodian people. In appreciation of their hospitality Her Royal Highness wished to give them a lasting gift, i.e. education.
The Government of the Kingdom of Cambodia, led by Samdech Akeak Moha Sena Padey Techo Hun Sen responded to her initiative by providing the site of the school covering an area of 45-rai (expanded to 117 rai afterwards) in Prasat Sambor District, Kampong Thom Province. 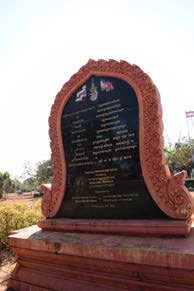 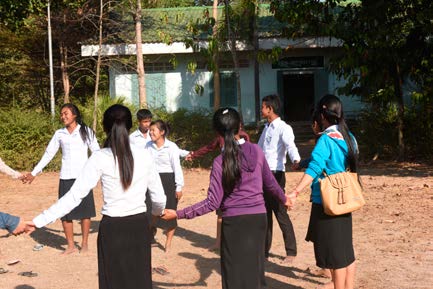 Her Royal Highness Princess Maha Chakri Sirindhorn gave financial support for the construction of buildings and other facilities, which began in September 2001 and was completed in April 2005. Kampong Chheuteal High School was officially opened on November 10, 2005.

This educational institution is the only secondary school in the Kingdom of Cambodia that provides dual-system, i.e. vocational and general education.

The initial preparation of the infrastructure gained support from several agencies. The Royal Thai Army by the Engineering Department, for example, provided assistance in site survey and improvement, while the Border Patrol Police Bureau provided support for improvement of the quality of life of students and school personnel.

With respect to educational programmes, the project also received cooperation from several educational institutions, namely the Faculty of Education, Chulalongkorn University, Buriram Rajabhat University and Sisaket Rajabhat University, as well as the Office of the Vocational Education Commission provided assistance in human resource development by offering scholarships for further study and organising observation tours in Thailand. Other forms of assistance included curriculum development for both the general and vocational tracks and training on how to organise teaching and learning activities.

Miss Sam Chhuna, a student in the first class of Kampong Chheuteal High School who was awarded Her Royal Highness’s scholarship for further study in the bachelor’s and master’s degree programmes at Burapha University said that, “I am proud to have been given an opportunity for self-development and I will make use of the knowledge gained for further development of Cambodia. Recipients of Her Royal Highness’s scholarships who graduated from educational institutions in Thailand are now teaching at Kampong Chheuteal High School or working at companies in Cambodia. They have succeeded in their careers and this has helped to improve their quality of life.”

To bring about the improvement of quality of life and education for residents in the community, Her Royal Highness Princess Maha Chakri Sirindhorn initiated over twenty school development and extracurricular activity projects at Kampong Chheuteal High School. One of this was the 108 Vocations Training Project, aimed at providing vocational options and means for income generation for students and local residents in the community. Two other projects included the Sufficiency Economy Project to advocate the concept of being resilient and self-reliant, and the Kampong Chheuteal Co-operative Project to instil the cooperative ideology, principles and methods in the students’ minds. 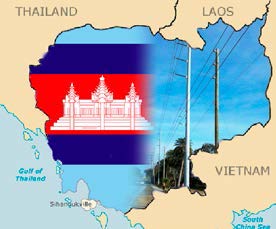 Based on available information, in 2013 power generation capacity in Cambodia was 390 Megawatt and diesel oil was the main source of fuel used for power generation. Cambodia also imported approximately 600 Megawatts of electricity from Thailand, Laos, and Vietnam, 400 MW of which was for usage in Phnom Penh.

The area where Kampong Chheuteal High School was situated at that time was without electricity and water supply. The school had to rely on the use of diesel fuel for power generation, which incurred a lot of expenses. In view of this, Her Royal Highness advised that there should be efficient and cost-saving energy management at the school.

The PTT Public Company Limited kindly donated 15 million baht to support this project. NSTDA installed a 126-kWp PV system at the school. The system comprised a 70-kWp (56%) subsystem that generated power directly during the day and a 56-kWp (44%) subsystem equipped with a photovoltaic battery storage unit to provide solar power at night. At any time that power consumption exceeded the production capacity of solar cells, the system would activate the diesel-powered generator to ensure that there was sufficient electricity for consumption. Using electricity generated by the PV system could reduce the huge expenses that would have to be spent on the cost of diesel fuel.The cost-benefit analysis conducted showed that the pay-back period of the PV system would be six years, when compared to power generation by-using diesel fuel only. 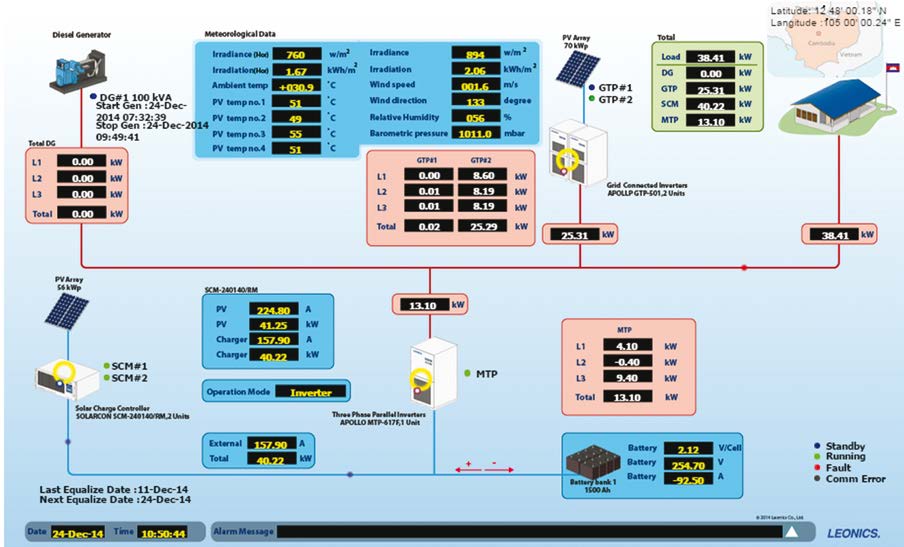 A diagram demonstrating how the PV system works,
delivered in a real-time basis via the Internet to NSTDA 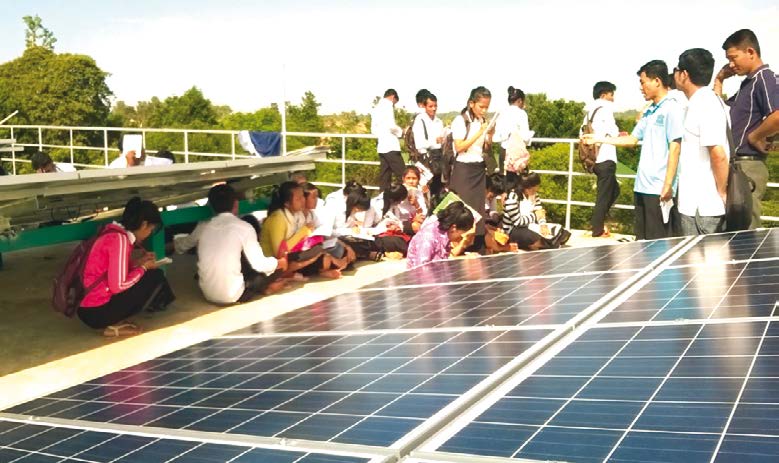 Students and personnel at Kampong Chheuteal High School could manage the PV system operation and maintenance themselves, because the topic of solar energy was included in the curriculum. Training was also organized on relevant technical aspects, such as the design, operation, and maintenance of PV systems. NSTDA also installed a real-time motoring system via the Internet to enable remote control of the PV system.
At present the school’s administrators, teachers, staff, and over 1,500 students benefit from the electricity generated by photovoltaic cells--the infrastructure that allows educational activities at the school to be carried out smoothly. Needless to say, this project has not only played a part in upgrading the quality of education of rural Cambodians, but also strengthening the close tie between Thailand and Cambodia. 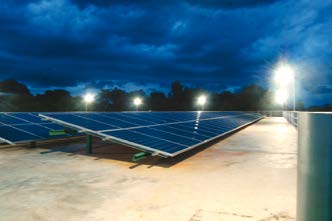 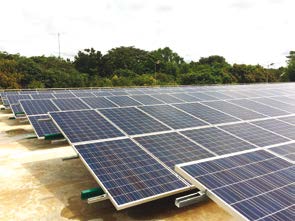